How To Eliminate The Money Mindset That Keeps You Broke

We are diving in deep this January with a free training to help you finally stop overspending and part of this training means learning how to eliminate the money mindset that keeps you broke.

Are you ready to stop being broke?

If so let’s get started.  I’m going to share with you the same solution I used to break free from living paycheck to paycheck and how using a few tricks was able to replace my money mindset so it worked for me and not against me.

HOW TO ELIMINATE THE MONEY  MINDSET THAT KEEPS YOU BROKE

You know, trimming the fat from our budgets and creating a spending plan that works isn’t as easy as it looks.  I remember banging my head against the wall trying to figure out why something that sounded so simple was so difficult for me.

We’ve all been taught that if we can stick to a budget that after it’s over (and let’s face it – it’s never really over), we’ll have financial freedom, never overspend, or will be unhappy again.  Sure, there are some women who can stick to a budget and do find financial peace, but I am not one of those people, and I’m guessing…neither are you.

Trying to budget to control spending actually doesn’t work for most people, and it’s not that there anything wrong with you, you’re just doing it wrong.  And when you’re doing it wrong, you could spend years going in circles, never cracking the code to financial peace and freedom.

You see there are two really simple steps that most budgeting programs are missing.  It’s probably not something you’ve considered before and it’s actually a little counterintuitive which is why I wanted to teach you all about it in the second lesson of The EMBRACE Program Series.

We’ve had lots of women enroll in the free training, and I’ve been overwhelmed by the breakthroughs so many people, just like you are having.  I recently received this note from a woman that just blew me away… “Recognizing the thoughts in my head around money was an idea that I had never really given much consideration.  But when I heard you say, “thoughts control actions” something finally clicked for me.  I spent the better part of the next day first recognizing and then jotting down all the negative thoughts I have about money.  The first thing I noticed was how many negative thoughts consume my waking hours!  After evaluating them and seeing them for what they were – just thoughts – I decided it was time to put an end to them.  After spending some time on the forgiveness exercise I realized that much if not all that I learned and embraced as an adult was just things my parents taught me and didn’t serve me at all. I’m ready to release them once and for all and start embracing new thoughts that will help me as I move past my overspending and towards greater and greater financial peace.”

Amazing right?  I’m so proud of her!

In this next series, I’m also going to tell you the simple mindset shift that changed everything for me.  It’s seriously powerful stuff, and I can’t wait to share it with you.

You’ll see that in all six lessons, I walk you through the exact steps I took and that I teach the women in my program, EMBRACE, to create an amazing life and checkbook they love.  It’s a lot of information, but I want to make sure you are completely clear on how to make this a reality for you.

I can’t wait for you to dive into the second lesson in the series so many women have already had huge breakthroughs! And I honestly think this is the key to women everywhere not just loving their money, but actually creating a life full of love, meaning, and joy (and isn’t that really what’s important?).

Also if one of your friends has confided in you that she struggles with overspending, I would really urge you to send her this information.  I know it can be taboo to talk about this topic, but this training is not about being rich, it’s about having a fresh perspective on money.  You can just forward them this email, or shoot out a tweet!

It’s so important for women to support and be there for each other, so thanks for sharing the love!

Here it is again: Transform Your Money Mindset

Can’t wait to see you there.

P. S What I’m sharing with you isn’t just another magic position or secret formula to stop overspending in an instant.  It’s about becoming financially free.  FOREVER.  And I hope I’m your last stop on the journey. 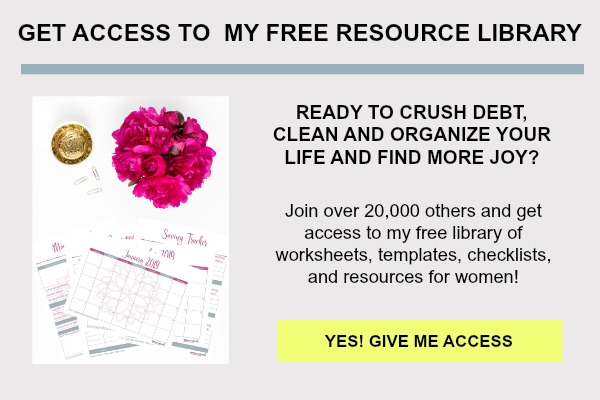 0 shares
Want to declutter? Get this FREE ebook!