Before I made the decision that getting out of debt was preferable to losing my home, I was a free-wheeling, credit card swiping, serious shopping junkie. I never told myself ‘no,’ put anything down and walked out of a store, or cared about coupons, sales or discounts.  I bought what I wanted when I wanted it with little regard for the financial consequences of my spending.

I had a good job and the illusion that I would always have a good paying job with a regular salary coming into my checking account was taken for granted. So, when all that changed and I found myself unemployed, I was, well,  a little unprepared.

The experience of losing my job was very similar to my experience of getting divorced. I immediately went into denial mode and continued to spend money as if I still had an income. That was until I got the foreclosure notice and the mere site of it shook me from my coma and finally woke me up.

7 Things I Cried Over When Getting Out of Debt

Getting out of debt requires some degree of sacrifice, and I quickly realized after the shock wore off, that I was going to have to forfeit some of my most beloved expenditures.

Sacrifice.  The word was foreign to me. I wasn’t used to sacrificing. I was used to getting what I wanted and fulfilling every desire as soon as the desire crossed the consciousness of my mind.  How would I do this? What would I give up?

The first thing I did was sat down and made a list of the things in my life that weren’t a necessity.

My first go around was tough. I didn’t have much on the list because honestly, everything seemed like a necessity.  But after a night of soul searching and tossing and turning I was able to recognize my resistance and began making my list.

Some of the items that made the cut I knew I could live without. But some of the things shook me to my core.  I was downright depressed over what I was going to have to do without. First on the list and the one I had the biggest trouble giving up was my beloved fake nails.

Now before you send me an email about fake nails, understand at the time they were part of my identity. I had worn them for over 20 years and took pride in their regular upkeep. I once told my daughter to make sure when I died; my nails looked good – no joke. I got regular maintenance every two weeks at a cost of $23 per visit (tip included) resulting in annual savings of $598.

I’m a girly girl and as such I loved to take care of and pamper myself any way I possibly could. So of course, pedicures were part of my overall personal care routine. Sometimes I would get a regular pedi when the time was limited. But more often than not I would go for the deluxe treatment which of course was twice the price. Why wouldn’t I, right? Those beautiful foot treatments and massages cost me $600 annually, so they made the cut. Next up was the daily coffee and bagel. Every morning without exception I would take a jaunt down to my favorite bagel joint and get my regular large hazelnut coffee and cinnamon and raisin bagel. I would chat with the owner, who had a thing for me and we flirted a bit – it was a nice way to start the day. In hindsight, he probably had more of a thing for my money than he did for me when I realized I was spending $2,190 a year in his shop.

Once again my personal care routine to a hit. I was really getting depressed at this point, and the tears were streaming down my face. How much more could I take?

A color was usually around $65 each time I went, and I got my hair colored every month. $780 was too much to spend when I had over 50K in debt. No more colors for me. I would have to let the grays grow out and deal.

I had a very stressful job when I had one, and the people I worked for were like the devil incarnate. I would get the worst neck and shoulder tightness that could only be relieved by regular massage. So when the job was gone, the massages needed to follow. At a total cost of $2800 a year, it was something I could no longer justify. I loved the gym. I worked out six days a week and really loved the daily grinds, but my membership was pricey, and I wasn’t sure if I should be spending all that money to do something I could do at home if I put my mind to it. So for the cost of $780 and the opportunity to pay my debt faster, I sacrificed the gym membership.

Last but certainly not least, I put a halt on all vacations. Although I always enjoyed my excursions away, whether it be a weekend in the mountains or a couple of weeks at the beach over the summer, I knew those days were over for a long while. I spent around 5K annually on trips, so it got the ax too.

Of course, countless other things made the list like shoe shopping and well, shopping in general, but these seven items made me really heartbroken. I did cry, not crocodile tears either. I cried real tears of sorrow because I was giving up a part of my life.

Of course, I got over this feeling over time because my sadness was replaced with the happiness I felt each time I paid off another credit card bill or saw how much progress I had made paying off my debt. Eventually, my old life was replaced with a new life, one where I didn’t spend money recklessly. Instead, I adopted a simple life where I’m not consumed with endless purchases.

Today, my nails are back on, and I do indulge myself with some of these items albeit not so frequently. I splurge from time to time on a good massage, and I have the gym membership that’s not so costly. But the difference today is I can afford it. I never put anything on credit cards and I always pay with cash.

If you find yourself struggling with the lifestyle changes that need to occur as you make your way out of debt, understand you’re not alone. What you’re feeling is entirely normal.  You’re grieving your old life and it’s ok.   Many of us were there at one time and made it out to the other side  – and you will too. 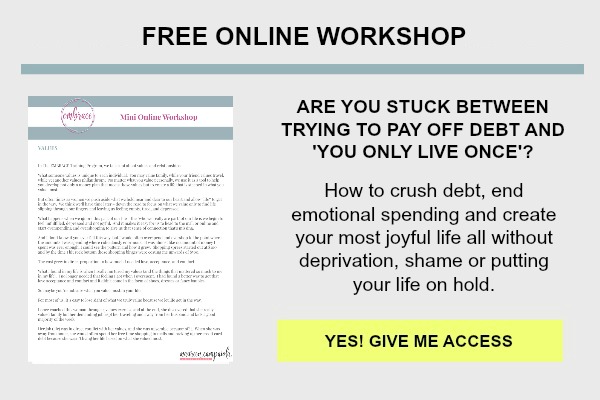 218shares
This post may contain affiliate links. If you click through and make a purchase, I may receive a commission at no additional cost to you. Please see our disclosure policy for details.
My Favorite Money Saving Tools EBATES For On Line Shopping! DIGIT For Automatic Savings GROCERY BUDGET MAKEOVER For Everyday Savings at The Grocery Store
Want to declutter? Get this FREE ebook!